When Henry VI was King of England they ran an act in the parliament in the year 1429 that gave a grant of £10 to anybody that would build a castle or tower of a particular size. The Knights of Kerry built a lot of castles with help from the grant. Minard Castle was one of them. It was built on high land near “Béal na gCloch” (Mouth of Stones) looking out on Dingle Bay. It was a castle with four floors high and an underground floor also. It was around 50 feet wide and about 41 feet long. It had 11 windows and it was 50 feet high. 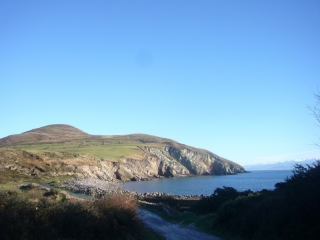 The Fitzgeralds lived in the castle. Minard castle was the only castle in the Fitzgeralds’ property between Castlemaine and Dingle. In 1650 when Cromwell‘s forces attacked Castlegregory the owner of the castle Walter Hussey and the rest of the men escaped across the mountains to Minard Castle. Not long after, Cromwell ‘s forces circled  the castle under the  command of Colonels Lehunt and Sader .Hussey and the rest of the men  bravely tried to defend the castle but soon ran out of ammunition. Finally   gunpowder was placed at the castle’s corners and the castle was blown up. Hussey’s body was identified as he was wearing red socks!